For the fifth year in a row, Métis Nation of Ontario (MNO) Veterans’ Council Senator Dr. Alis Kennedy, O.ONT, CD, OMC, had the honour of being invited to the Remembrance Day ceremony at Queen’s Park by the Office of the Premier.

During the ceremony, attendees were able to view a video of Premier Kathleen Wynne’s attendance of Remembrance Day ceremonies in Hong Kong, China. Premier Wynne spoke in a video message and afterward her partner, Jane Rounthwaite, placed a wreath at the memorial on the Premier’s behalf.

During the ceremony, a local resident captured a lovely picture of President Jensen as she humbly placed the wreath.

“I didn’t know this photo was taken,” she shared in an e-mail. “It was sent to me by a friend. He gave me permission to share it.”

Senator Contant respectfully removed his hat after placing a wreath at the memorial. The wreath was covered in poppies and shaped like a cross.

The MNO Northern Lights Métis Council asked Senator Contant to place the wreath to honour all soldiers on behalf of the MNO.

The Métis Nation of Ontario (MNO) Veterans’ Council recently presented a certificate of appreciation to the Royal Canadian Legion Branch 82 in Port Credit for their continuous support of Métis veterans.

Including the Métis flag in Branch 82’s colour party is a great honour for Métis veterans.

In 2011, the Royal Canadian Legion Branch 82 donated the first Métis veterans wreath that would be placed at the Port Credit cenotaph. The wreath has been with the MNO Veterans' Council ever since. In addition, Métis veterans are proudly and publicly acknowledged when the Métis veterans’ wreath is laid at the cenotaph.

“Royal Canadian Legion Branch 82 has and continues to welcome our Métis veterans as part of the Canadian fabric and their contributions to Canada,” said MNO Veterans’ Council President Joseph Paquette.

The certificate of appreciation was presented to Branch 82’s President Bob Borre for their continued support.

The Métis Nation of Ontario (MNO) Veterans’ Council attended the annual meeting of the National Council of Veteran Associations (NCVA) in November 2015, where veteran organizations are given a chance to put together a legislative program to be brought to the federal government’s attention.

The NCVA advocates for over 60 different veteran organizations.

The Louis Riel Medal and certificates confirm that Ross and Michel are both verified veterans within the MNO.

Senator Kennedy also presented a certificate of appreciation from the MNO Veterans’ Council to Youth Representative Christine Skura, RN, for her written contribution to Fighting For Canada Before There Was A Canada: Ontario Métis Veterans Pass the Torch.

Beaulieu received an appreciation certificate during the 2015 Annual General Assembly (AGA) for her submitted article about the MNO Veterans’ Council President Joseph Paquette and Skura interviewed and wrote an article about Senator Kennedy. The book was released in August of this year.

The presentations were followed by a discussion about the MNO Veterans’ Council’s youth and veterans pilgrimage to Vimy Ridge.

On September 25, the Métis Nation of Ontario (MNO) Veterans’ Council, in collaboration with the Belleville Police Service, presented the Louis Riel Medal and certificate to four MNO veterans.

MNO citizen Clark Beamish, CD, was the first among those gathered to receive the Louis Riel Medal. 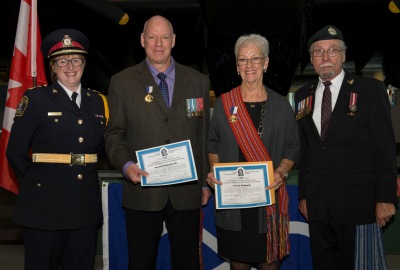 The third and fourth recipients of the Louis Riel Medal were Yvonne I.L. Gebhardt and her son Donald Gebhardt, CD. After Yvonne received her medal, Paquette stepped aside and Yvonne presented her son with his Louis Riel Medal. Don’s wife Linda and his two daughters, Hannah and Laxi, were present at the ceremony.

Working together as a community

The Belleville Police Service and the MNO Veterans’ Council have established a good long-term connection, working together within their community.

“We must contribute towards healthy communities throughout our province,” Paquette said.

A chance to see history

The National Air Force Museum of Canada has a national reputation for having the largest number of aircraft on display.

The presentation platform was placed in front of the famous, fully restored Handley Page Halifax aircraft. “It was quite the honour to display the Métis flag in the Trenton museum,” says Paquette.

Mandeville and Paquette had the opportunity to visit the museum later in the day. 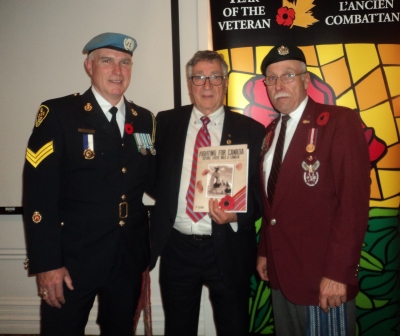 The Métis Nation of Ontario (MNO) Veterans’ Council’s President Joseph Paquette and Sergeant-at-arms Rob Baskey were invited to attend the Take A Vet to Dinner event held in Orillia.

Paquette and Baskey were sponsored by City of Orillia Councillor Ralph Cipolla.

It was a great evening! Baskey and Paquette were very grateful to have a venue provided to showcase the MNO Veterans’ Council’s plans and activities.

Baskey, a sergeant with the Ontario Provincial Police (OPP), began his career in law enforcement in 1990 with the North Bay Police Service. In 1995, he transferred to Mattawa, followed by working with the Provincial Violent Crime Linkage System (ViCLAS) Centre and the Orillia OPP Detachment, where he is currently the communications strategist for Community Mobilization and Engagement efforts.

In 2012, Baskey was seconded by the Royal Canadian Mounted Police (RCMP) to be deployed in the United Nations Mission in South Sudan (UNMISS) to train, mentor and advise the South Sudanese National Police Service and the Government of South Sudan.

The MNO Veterans’ Council is pleased to have Baskey’s experience added to their ranks.

During the 2015 Annual General Assembly (AGA) in Midland, the Métis Nation of Ontario (MNO) Veterans’ Council launched the release of a new book, Fighting For Canada Before There Was A Canada: Ontario Métis Veterans Pass the Torch.

The project that led to the book’s release began in the spring of 2013 and submissions by Métis veterans, veteran supporters and Métis youth were published in the book. 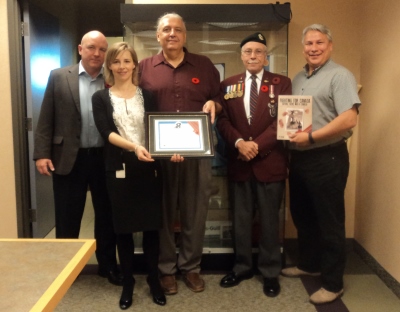 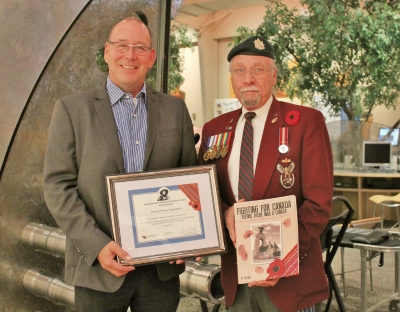 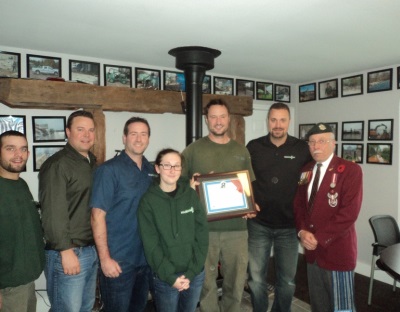 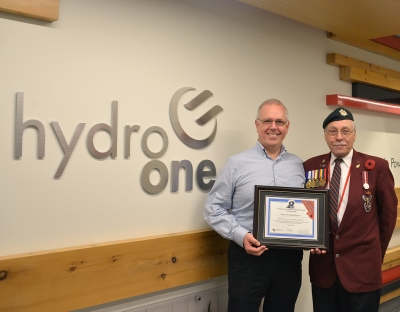